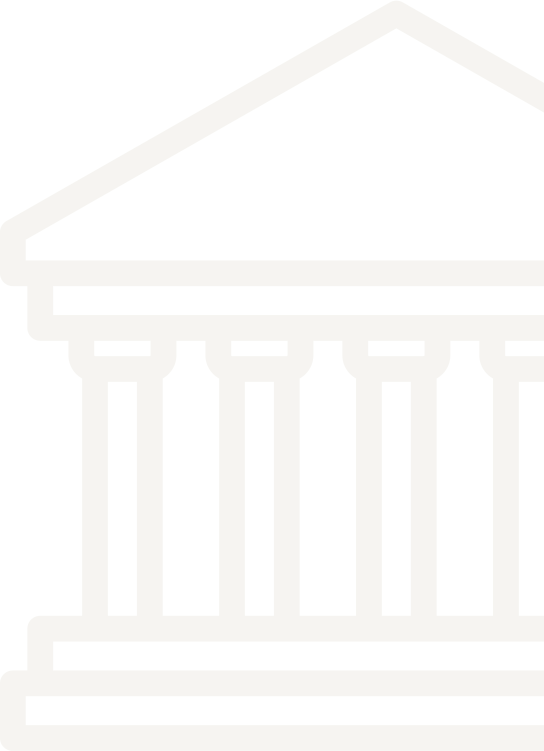 The Law Firm has been operating since 1999 and, since then, has been serving and advising owner-operators, sole traders and enterprises to this day.
Our overriding objective has been to provide our Clients with stability and peace of mind, that is, to ensure the safe and secure running of their business.
It is worth asking oneself the following question:
Who can provide your company with greater legal certainty and security: a random, anonymous internet user or a team of professional legal counsels who work and collaborate with you on a daily basis and know the ins and outs of the day-to-day running of your business?

Representatives of various branches of our family tree – both on the distaff and spear side – have, for over a century, been professionally involved in the legal sciences and the justice, passing their knowledge and experience on to successive generations. Thus, one could say that the Law is our family tradition.

The oldest references to family lawyers concern my great-grandfather, Paweł Niklewski (1853-1922). The Niklewski Family comes from the town of Kwidzyn, in northern Poland, however, the political turmoil of war forced them to move to Toruń. The doyen of the family, Paweł Niklewski, must have made a valid contribution to the struggle for independence of the Republic of Poland since the town of Kwidzyn officially commemorated his centennial – the 100th anniversary of his birth.

The Baltic Daily of 31.1.1953 included an account of these celebrations, confirming that Paweł Niklewski was a modest clerk of the court and a meritable patriot who fought to protect the Polishness of the Kwidzyn lands. Paweł had four children, three sons and a daughter, Irena – my grandmother. Three of them took up the law profession. Marian Niklewski (1900-1970) graduated from the University in Dresden. In the years 1926-1929, he was the prosecutor of the District Court in Toruń. Since the end of the Second World War, he ran a private legal practice located in Toruń, at No. 1 Szczytna Street. He was also an avid philatelist and active member of the Polish Philatelic Union. Marian’s law office was run by my grandmother, Irena Radomska, née Niklewska (1906-1988). Paweł’s younger son, Stefan Niklewski, on the other hand, left for France and settled there, in Nancy. Stefan was a graduate of the University of Nancy – a doctor of law. Although he did not actively practice his profession, his merit was that he became friends in France with my future grandfather, Zdzisław Radomski (1908-1971). Zdzisław graduated from the Ecole Supérieure de Commerce et D’Industrie de Nancy. In 1940, as a member of staff of the Ministry of Foreign Affairs, he was a diplomatic representative in Brussels. In 1938, was honoured with the Silver Cross of Merit in recognition of his contribution to the civil service. During the Second World War, he served as a Senior Rifleman in the 2nd Battalion 1st Independent Rifle Brigade in Scotland. The post-war political situation sidelined him away from diplomatic service.

My grandfather had a brother, Bolesław Radomski (1904-1956), who – despite not being a lawyer – is still a persona worth mentioning. Bolesław started studying at the Lviv university of technology – the Lviv Polytechnic National University. He gave up his studies after the first year and entered the Seminary. Ultimately, he graduated from the Pontifical Gregorian University in Rome. He was a doctor of theology and philosophy, associate professor of the Catholic University of Lublin, and Dean of the Faculty of Theology there. The fact that he held these university and ecclesiastical offices did not prevent him from pursuing his passion for riding motorcycles, which never stopped being problematic for the ecclesial authorities. Going back to the proper genealogical line, it has to be said that it was thanks to Stefan Niklewski that my grandparents, Zdzisław and Irena, met. They too brought my father, Wiesław Radomski, into the world.

Wiesław Radomski was a graduate of the Nicolaus Copernicus University in Toruń. He is a doctor of Juridical Science. In the years 1965-1991, he was a researcher and lecturer at the Chair of Civil Proceedings of the Faculty of Law and Administration, Nicolaus Copernicus University in Toruń. He is a Legal Counsel. He was also the co-creator of the self-government of legal counsels in Toruń. He was decorated with the following distinctions, among others: The Gold Cross of Merit, and the Medal of the Commission of National Education. He established the “Doradca” (English – Advisor) Law Firm of Legal Counsels in the 1980s, which was one of the first private legal counsel law firms in Toruń, which he runs to this day. He is an expert in the field of civil procedure, tourism law, and real estate law, being a Real Estate Counsellor.

My mother, Ewa Radomska, is also a graduate of the Nicolaus Copernicus University in Toruń, and a doctor of law, too. She has been a research fellow and lecturer at the Chair of Civil Law of the Faculty of Law and Administration, Nicolaus Copernicus University in Toruń since 1969. She practices as a Legal Counsel. She was decorated with the Golden Cross of Merit. She is currently a partner at the “Doradca” Law Firm of Legal Counsels. Expert in civil law, the law on cooperatives, family law, and modern rules of economic contract law. Needless to say, there were also lawyers on my mother’s side of the family. Apart from her, her sister, Maria Anna Karwowska, also graduated from the Faculty of Law of the University in Toruń and, likewise, holds a doctorate in law.

It can be reasonably presumed that they both chose this professional pathway under the influence of their uncle, Marian Węclewicz (1903-1986), who was a very colourful character. Marian Węclewicz was already taking part in military action in the Greater Poland Uprising of 1918 at the young age of fifteen. In 1920, he voluntarily entered the 15th Poznań Uhlans Regiment and fought in its ranks in the Polish-Soviet War. He graduated from the Faculty of Law of the University in Poznań in 1933. After his traineeship and assessment, he was hired as an Investigating Magistrate at the District Court in Gniezno. In the September Campaign of 1939, he fought in the ranks of the 17th Uhlan Regiment. After the capitulation, he was taken captive and remained a prisoner until the end of the war. Starting in 1947, because of his profession and knowledge of foreign languages, he served as an investigating officer in the Polish Military Mission for the Investigation of War Crimes. His responsibilities included tracking down Nazi war criminals who were then brought before the Polish courts. He operated in the American zone in Dachau and Munich, in the British zone at the General Command of the British Armed Forces, as well as in Berlin as the Head of the Office for Extradition and Investigation. Since his return to Poland in 1948, he was subject to persecution by the authorities at the time, which prevented him from practicing as a lawyer. He spent 16 years in forced labour, working at a dairy farm and a sawmill, among others. It was only in 1964 that he could go back to his legal practice and opened up a law office, which he run until his retirement. He managed a team of legal counsels in Gostyń for several years.

Marian Węclewicz received many distinctions for his activities. In the years 1919-1939, he was decorated with the Commemorative Medal for the War of 1918-1921, the Medal of Independence, and the Silver Cross of Virtuti Militari, an order of military virtue. After the Second World War, he was decorated with the Greater Poland Uprising Cross, the Officer’s Cross of The Order of Polonia Restituta, the Bronze and Silver Medal of Merit for National Defence, the Cross of Valour, and the Medal of Merit for Work for the Bar in Poznań. In 2003, his professional activities were honoured with a commemorative plaque placed on the building of the Court in Gostyń.

Thus far, this century-old legal tradition has had its culmination in myself, Marcin Radomski. I too graduated from the Nicolaus Copernicus University in Toruń and am a Legal Counsel. I grew up in an environment brimming with legal disputes and discussions, spending long hours in my childhood years in what was popularly known as the “Harmonica” building, where the Faculty of Law and Administration of the University in Toruń was housed. It can safely be assumed that I learnt to speak at the law camps run by my parents, sitting in courtrooms, which was where the summer classes for students were held. At the age of six I participated in my Mother’s PhD defence, which, at the time, wasn’t of great interest to me. I took part in the legal life of the “Doradca” Law Firm from the very beginning of my studies. With the start of my legal counsel traineeship and alongside my internship in the Law Firm, I joined the legal team at Bank Gdanski S.A. This gave me very broad and extensive experience in the field of handling banking relationships, registered pledges, and the law on bills and exchange and promissory notes. In 1999, I opened my own Law Firm specialising in servicing business trading and the mentioned banking, and bills of exchange and promissory note affairs. My parents and I are in constant cooperation and continue to offer shared services to Clients. Our knowledge from different fields of law and comprehensive experience gained over many years of practice are an ideal – perfectly complementing – combination that enables us to provide the highest quality services to our Clients. Running different law firms, however, allows us to pursue our own, invaluable plans, objectives and visions. 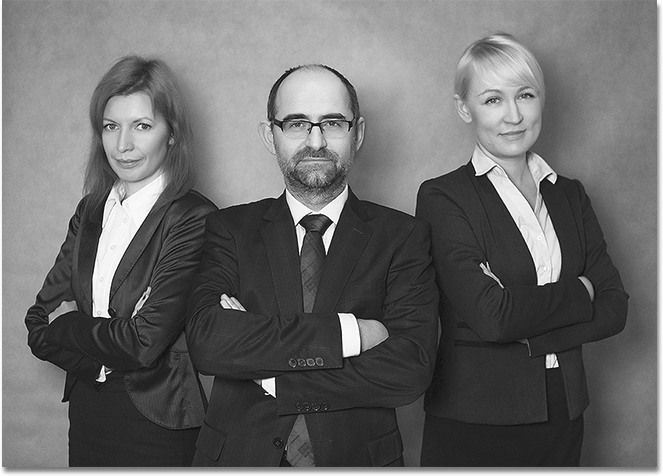